A Leap Of Faith Is Always One Hell Of A Ride

My nephew, Eduardo, and his wife, Yessica, were married this past weekend — so #Rubiopalooza was in full effect. Not only was it a very beautiful ceremony, reception and dancing (oh my God, the dancing!) I also spent a lot of time talking with old friends and friends of family, listening to the wonderful things they had to say about The Tortilla Kid. So thank you all for reading.

To those of you still waiting to read it all in Español, my apologies. I think about translating my posts every single day but I just cannot seem to find the time.

But I promise, I will get to that soon. Very soon.

Despite all the happiness from this weekend, today, I have to admit, I woke up in a bit of a funk. In fact, as I was getting ready for my day early this morning, a tower of dishes that had been laying on a towel on the counter next to the kitchen sink, managed to collapse and I just left all the remains on the floor. As I type these words, the remanences of this plate are still there.

I am not sure what I am feeling, exactly, but when I mention these episodes to my mom, like I did tonight, she worries. A lot.

It’s only a dish.

Mostly because she doesn’t want me to feel this way, but also because she might feel partly responsible for why I feel like this periodically. Throughout the rest of the day, I did begin to feel better. I managed to feel super productive at work and made it out for some much needed exercise.

All in all, it turned out to be a good day.

But as I sit here writing though, I do think about my mom and all that she has managed to deal with throughout her own life, both with her illnesses and the challenges that surrounded her and then there was the Jesus tortilla. How was she able to survive it all? Was it really the strength she plead God for all these years?

As I have mentioned a few times, I am personally struggling with my own faith and have been for most of my life. As a 35 year old person now, who happened to grow up in a strictly Catholic household, living right across the street from Our Lady of Guadalupe and with very devout parents, it was confusing. I eventually fled Lake Arthur after High School in order to experience the world, but despite the adventures that come with moving around and traveling, I never could escape this thing we call faith.

When I left Lake Arthur to study at New Mexico State University in Las Cruces, for example, I was immediately introduced to, what I would call now, evangelical Christianity. For those of you who have never attended college at a university, the first few weeks are much like rush week for sororities and fraternities, except that its religious clubs who are in full recruitment mode. They lure young freshmen with free pizza and soda, much like those credit card companies, who stake out kids outside student centers, handing out free t-shirts if you sign up for one of their cards, something you will regret as an an adult when you’re trying to improve your credit scores. (that’s another story altogether)

I was one of those Freshmen that this religious group convinced to join and wouldn’t you know it, the pizza worked. For about three years, I was part of this group of Christians who roamed the campus, believing that in order to have a relationship with God, you must be “saved.” But honestly, I never really truly believed it. In fact, I kind of felt like it was all just a joke. What kept me going, though, were the people I fell in love with along the way. It’s always the people.

It was the summer of 2000, right before the beginning of my Senior year of college and I was living in Rhinebeck, New York, just north of the city. I can honestly say that it was the summer of my own awakening. I met some of the most amazing people, experienced some real life lessons, and the people I met along the way not only didn’t look like me, but they also didn’t believe exactly what I believed in. In fact, the people that I met that summer were so diverse, I found it to be truly amazing. My whole world just lit up! I quickly learned and fell in love with this group of people, regardless of our backgrounds and beliefs, and it became, in my mind and heart anyway, a true reflection of my planet and that not one of us held the real truth. In fact, why couldn’t we all be on the right track?

For the next ten years after that, I did not really think about faith anymore. Ironically, after having had such an amazing summer, I spent the next decade thinking about how absurd this whole “faith” situation was, countering or debating the religious fanatics any chance I could, questioning it all of the time. Yet, all the while, as I traveled the world and lived in a number of cities across the country, I kept returning to the obvious reminders of my upbringing, of my own faith, which in my case was home. Gripping tightly to a rosary my mom had given me so long ago, each and every time I boarded that flight to somewhere, or whispering a prayer during moments of utter loneliness and despair.

Loneliness and despair is a place I found myself in today, except this time, prayer, hope and faith, did not feel so foreign to me. 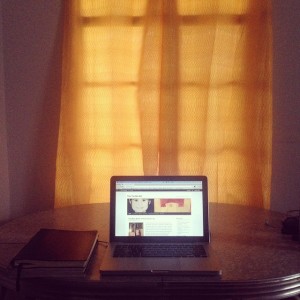 For over a decade, I have wanted to write about the Jesus tortilla and my mom’s experience, but for some reason it never seemed like the right time. But after years of searching for purpose in my own faith, I seem to have found the space to write about it all. I really can’t explain it, but I know it is the right time. Now.

I do not know where I found myself today. I do not yet know what I believe nor do I pretend to understand what this all means. All I know is that I must not question anymore and just write.

Writing brings me comfort and being vulnerable, albeit publicly, brings me relief. Just as Our Lady of Guadalupe in Lake Arthur brings my mom peace, writing these simple words brings me tranquility.

This is my sanctuary.