My Love For Writing Is No Coincidence. Just Ask My Mom 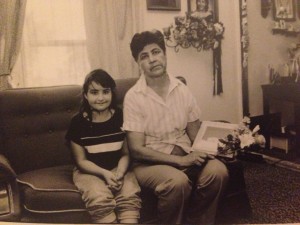 Photographed in 1989 (the rolled up pants give that away) Mom and I at our home in Lake Arthur, being interviewed about the Jesus tortilla.

My mom has been sick since the day she was born in 1940. Although her depression may have begun at the age of 23 or so, she struggled with malnutrition, painful earaches and bouts of serious bronchitis from a very early age. I share all of this because regardless of what has been thrown at her, my mom has always been a creative being with an imagination and a passion for art. But much like my dad, who I wrote about in my previous post, my mom has been misunderstood and she’s never been given the chance to share more of who she really is.  A writer.

Mom was the second oldest of three girls, born to Cruz and Dominga Morales in El Barranco near el Mulatto outside of Ojinaga, Chihuahua.  As mom grew older, she not only dealt constant illnesses but was also overwhelmed with the pressure and chaos of moving (the first time was from El Barranco to Rancho Barrenitos when she was just one month old) which contributed to her illnesses. Mom would later deal with the biggest move of her life when her parents, after years of arguing over whether or not to go, migrated to the United States when mom was just 14 years old in 1954. Although my grandmother, Mami Dominga, was a United States citizen, having been born in Redford, Texas and would live with her aunt and uncle in Carlsbad, New Mexico during her adolescence, she would lead her entire family back, this time to Dexter, New Mexico. (Mami Dominga was awesome, but more on that later.)

Life on the farms in the Pecos Valley was difficult. Although it was a better life than the life lived in Barrenitos, mom was still surrounded by poverty and ongoing stress. 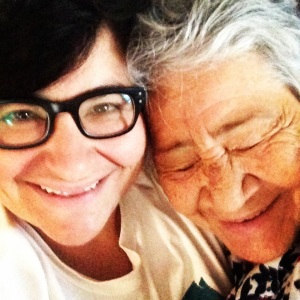 The stress would increase when mom would enter the school system in Cottonwood, New Mexico, just north of Artesia.  There, the teachers were unwilling to acknowledge the fact that my mom had incredible potential. My mom was hungry to learn, despite her frailty and shy personality. Whether it was her wanting to become a writer or a nurse, much like many newly arriving immigrants of today, my mom was seen as an “other.” Instead of seeing my mom’s ability to learn fast and her desire for knowledge, my mom was told she would have to start all over and attend classes with elementary students…as a teenager.

A young woman with such an incredible passion and love for writing and books, regardless of how elementary, and an imagination that could have brought incredible vision to pages and pages of written word, did nothing to inspire teachers at her school. They let her go.

I can’t even imagine what our world would be like today if my mom had been given that one opportunity. A chance to do what she loved to do.

My mother still writes and has been most of her life, but privately, journaling consistently almost every single day or when there is no conflict with Caso Cerrado and/or the new novela on television. Although this blog is to provide some insight on my life as The Tortilla Kid, with a backdrop of my mom and her life as the focal point to the story, my hope is that this blog will provide an opportunity for you to see her for who she really is. A writer. A lover of books. A strong woman with a silent voice.